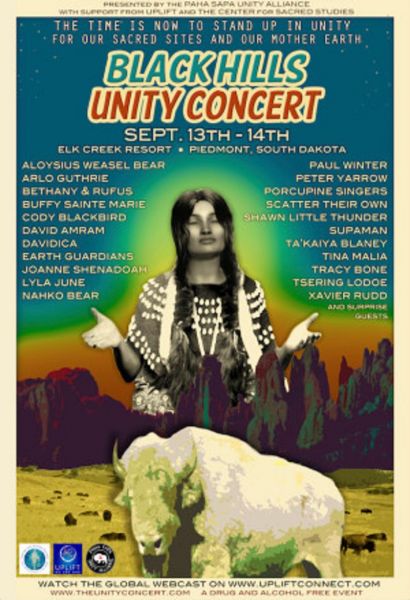 This weekend, Sept. 13-14, thousands will gather in the Black Hills of South Dakota for an historic event called the Unity Concert for the Black Hills Initiative. The gathering will be in support of the Great Sioux Nation who have been fighting for their land for more than 200 years. The event “will mark the beginning of a vital unification process to reclaim guardianship of the Black Hills as their rightful homeland, states Uplift in a recent video. The gathering will bring many different people from many different backgrounds together who are “committed to educating and raising support for the Black Hills Initiative.”
The organizers and participants of this initiative and event strive to hold the United States of America to it’s word, which for almost 150 years has been dishonorable. It was the Treaty of Fort Laramie in 1868 which promised “the absolute and undisturbed use and occupation of the Great Sioux Reservation, including the Black Hills” that was repeatedly broken.
The event this weekend strives to serve as a potent act of spiritual activism that holds an intention for reobtaining stewardship of the Black Hills for the Great Sioux Nation and the unification of all peoples for the peaceful care of the planet.. “In these momentous times of spiritual and ecological crisis and climate change,” wrote the The Unity Concert for The Black Hills Initiative Facebook page, On Sept. 9, “the Unity Concert is our symbolic [cry of] appeal for humans across the globe to reconnect with the sacredness of nature, to respect and protect the Earth and restore her to balance so we can sustain our planet for future generations.”
The event is free and open to all the public and will be held in the very heart of the Black Hills at the Elk Creek Lodge and Resort. At the event, a coalition of elders from the Great Sioux Nation along with elders from many Native American tribes, environmental, spiritual, and social activists, artists, musicians from all over the world, performers, Native and Non-Native allies and supporters will join together this weekend to support the return of stewardship of the remaining undeveloped parts of the Black Hills to The Great Sioux Nation.
The event will start off in ceremony which aims to clear the pain that has passed between the United States and all of America’s First Nations. Many of the performers and participants of the event will also make their own statements of apology, forgiveness and healing. The idea is to bring about peace enough for unification for one cause; In peace, the participants aim to promote and instill the proper and loving care of a shared planet, not only for those living now but for generations to come.
Peter Yarrow (from Peter, Paul and Mary), Arlo Guthrie, Buffy Sainte Marie, Nahko Bear, Earth Guardians, and Ta'kaiya Blaney are some of the artists who will perform this weekend. They will be joined by many other Native American artists and performers from tribal nations nationwide. There is a special page for more information about the lineup which you can view right here.
Free registration for the event is here. For those who are unable to physically attend the event, Uplift Festival will stream a free, live global webcast on their website. Supporters can also contribute to the cause by clicking on this link or by sending a tax-deductible donation to:
Return the Black Hills
The Center for Sacred Studies
PO BOX 2904
Guerneville, CA 95446

*originally published at AXS.
Posted by sireneatspoetry at 10:37 AM

sireneatspoetry
My name is Tameca L Coleman. I am a singer and writer residing in the Denver area. I have recorded with many bands and published multiple bits of work across genres.

Blogs I Watch More than the Ones I Follow: